You are here: Home / News / News / Getting to know Dawn Latham Dawn was born and brought up in Erdington, and has lived in Sutton Coldfield after she came back from University in Leeds. She has a wealth of experience in charity work and managing community projects, including a Director role for another Community Interest Company (CIC) in Birmingham. Dawn expresses that her “heart has always been in the third sector” and her previous work through the City Council has always been in partnership with third sector organisations. On describing this type of work, Dawn says “it’s always a bit of a challenge, but it’s important.”

There’s certainly an understated approach to the way Dawn views her work in helping make a caring – and cared for – community, as ‘a bit of a challenge’ has typically proven to mean big barriers, that have been overcome through strength in spirit and commitment. Dawn’s focus is on vulnerable children and families, and knows that supporting them is not an unrealistic vision – “if everybody does their bit, it makes a difference”.

Children and families in need of support became increasingly apparent to Dawn during her work for Extended Services. It was during this project that Dawn sought space for targeted services; that is, individuals on the peripheries of education, including support services, speech and language therapists, and others who might visit schools for various reasons. As a Cluster Co-ordinator, she was tasked with creating a hub to house these people and potentially deliver other services. In 2006, Dawn was walking across a car park and serendipitously discovered two derelict houses, previously used for charity meetings. In the image below, you can see the first email Dawn sent in setting out to use these buildings for the Hub space. 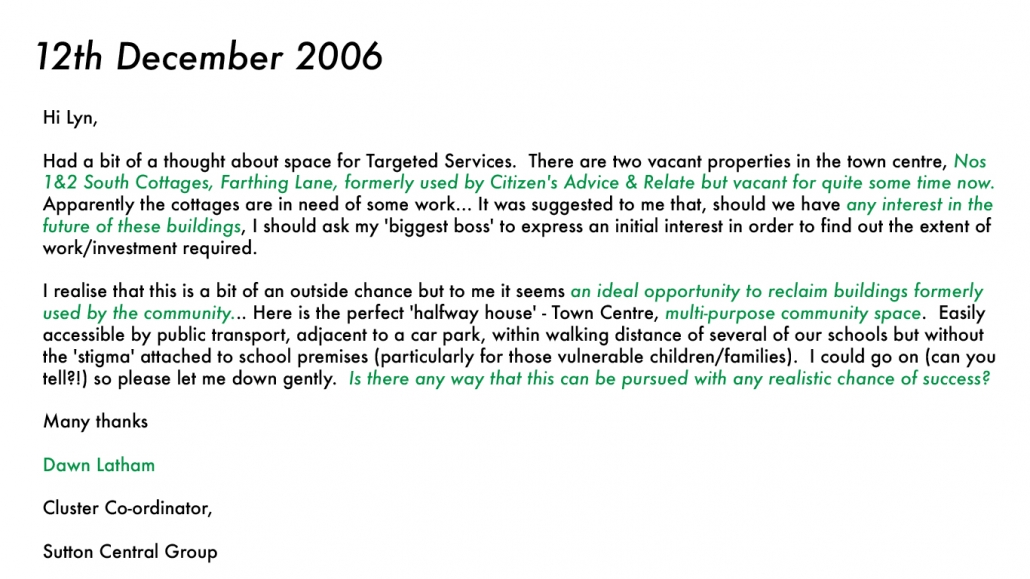 Dawn first set foot inside what would become the Community Hub in May 2007 and initially “didn’t think it was going to be possible”, as the buildings were highly dilapidated with ceilings that were caving in. But, there was potential in it and Dawn got the ball rolling, pushing through different loops, getting the Steering Group to agree on pursuing this property. On the 1st September 2007, an Action Plan was formed which included studies on feasibility and the development of the space as a multi-agency drop in. At this point, Kelly took over and continued the hard work, “fundraising and resurrecting the building into what it is now”. 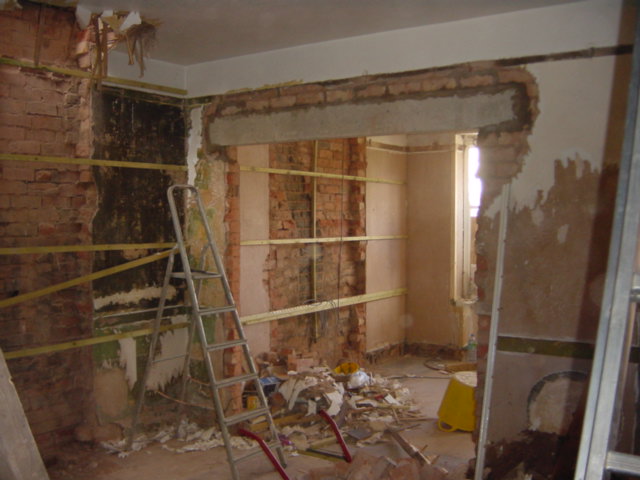 Dawn later enrolled onto the Mentoring training, which wasn’t at the time delivered by Our Place, but through Oasis Training. It was a general program, not specific to a type of mentoring. Dawn has a lot of pride for all the different ways Our Place has grown as an organisation, which includes going on to provide our own CPD accredited Level 3 Award in Mentoring Practice course, that offers specific knowledge in child and adult mentoring. The importance of truly making a difference is of clear significance for Dawn. This is seen through her decision to focus on parent mentoring, as she recognised that some children are not in charge of their own circumstances, and in some situations, change can only come from the parents. Dawn emphatically describes often overlooked aspects of our social landscape; there are generations of parents who didn’t receive good parenting themselves, and then go on to struggle with their own responsibilities as a parent. She says, “I felt I needed to do something to disrupt that”, again acknowledging the community-based need for support, “I can’t singlehandedly make that change, but I can do what is in my power”.

Dawn has been a parent mentor since and delivers training for the Level 3 Mentoring Practice Award. There is so much to learn from Dawn, and the sessions she delivers resonate for a long time, particularly the information and knowledge she offers on Safeguarding, and the necessity to remember the children who have suffered from abuse and failed by improper Safeguarding practices. Our Place also offer a course in Safeguarding as it is essential for the wellbeing of our mentees, and for anyone who has a role that involves being around children, young people and adults.

Dawn’s work is focussed on serious matters, including people and areas that don’t often get the attention they need. As a Community Connector for the Early Help Partnership, her roles include asset mapping, to identify and coordinate the available support, and finding the gaps in services, to know who and where needs more resources.

That being said, there’s a lot of joy in working with Our Place, it’s “passionate people coming together and sharing ideas”, with “every conversation leading to something new”. Dawn is proud to affirm that Our Place are doing exactly what was set out in the original vision for the Hub. Through a strong core and foundation, Our Place have been able to adapt and overcome various moments that could have prevented plans from coming to fruition. When asked where Dawn sees Our Place in a further 10 years time, she describes the future as unimaginable, and the overall hope is that there is no need for our services – the aim, as humble and focussed as she, is “steady growth, meeting the needs of our community, whatever they may be.”